Hello and thanks for stopping by!  I’m Kristina Virtue, a wife, mom, animal lover, and professional calligrapher based in Southern California.  I specialize in modern calligraphy and copperplate calligraphy, and am classically trained in Italic and Foundational hands.

Recently I branched out into the world of teaching calligraphy and designing calligraphy for weddings.  Needless to say, you stopped by at an exciting time!  Please read on for more information about me…

I was born and raised in Palos Verdes, California, a small coastal town just outside Los Angeles. I’ve also lived in Malibu, CA (while in college), Washington D.C. (summer internship while in college), Missoula, Montana (where I met my future husband), London, England (where I learned calligraphy), and St. Paul, Minnesota (where both of my daughters were born).

I graduated from Pepperdine University in 1994 with a Bachelor of Arts in Advertising and Art. I’ve also done a slew of post grad work at UCLA and Art Center College of Design. And, if you’re paying attention, I spent a whole year studying at Roehampton University in London where I learned calligraphy at the only university in the world to offer a program and degree in calligraphy. Doesn’t get much cooler than that!

I have found an amazing second family through our time spent at church. We participate in everything and anything at the church and it was there, through an ad looking for a chalkboard artist, that I refound my talent in lettering and interest in calligraphy. Always warm and welcoming not just to me and my husband but to my daughters, they’ve enthusiastically embraced all the calligraphy I provide, never knowing how much joy it brings to me. Quite possibly one of the biggest compliments and accomplishments in my life to date, was being nominated (and accepting) for the role of deacon. The role could not have come at a better time in my life, and I especially appreciate that my daughters can see me being such a positive influence in the lives of others.

My favorite color is blue but a close second is anything plaid or floral.

I homeschooled my two daughters for a few years and absolutely loved that I was able to spend more time with them when were little. A typical day included playing at the beach, attending a class at the CA Science Center, cooking, sewing, and playing legos, or wandering around the Getty-we are so spoiled to live in an area with so many recreational and educational opportunities at our fingertips. We have since returned to school and found so much to love about our new school.

I played ice hockey for years on an all women’s team and on a coed team while we lived in Minnesota. Playing ice hockey was what initially took us from the comforts of life in So Cal to Minnesota. (Carrying groceries down icy sidewalks and humid summers sent us back to where we are now, though).

One of my most favorite places in the world is Lake Como, Italy. Very close runners up (in no particular order) are Palm Springs, Hong Kong, anywhere in Maine, and pretty much all of Southern California.

I am a huge type nerd and fan of graffiti. You could talk to me about serif vs sans all day and I’d be a happy camper. Likewise, I’ll never tire of watching a freight train decorated with graffiti pass by or of an afternoon spent wandering around cities with displays of graffiti.

I am a huge fan of public transportation, which pretty much contradicts being raised in the suburbs of Los Angeles. Traveling by train on my first trip to Europe converted me to a life outside the car. I’d argue any day that a morning commute by ferry across the harbor in Hong Kong is a better way to spend some time than sitting in a car. I’ll take the hassles of missed or late buses just for the sheer humor in people watching and the mostly satisfactory people you meet on a bus.

We name all of our pets after characters from movies. Our first cat was named Lydia after Winona Ryder’s character in Beetlejuice (a classic in my book!).
We’ve also had Buck, an orange cat who was too nice and always chose to watch mice but never catch them, named after the lead in Uncle Buck, and a cutie pie dog named Maisy, named after another character from that movie.
Our current dog is Nicki, named after the female lead in the Bourne series. Had Nicki been a boy, it would have been named Jason. One day I’d like to have a Basset Hound named Wally.

Try as I might, I simply couldn’t come up with a favorite food. Among my faves would be tacquitos from Olvera Street, afternoon tea (the fancier the better), fish and chips while watching the dolphins play in the ocean in Malibu, and tons of Japanese food! Recently we discovered Indian food and love it.

And finally, I have a dog and a husband to round out the picture. Nicki gets me outside each morning and evening for her walks, and helps teach the girls about so much. My husband understands my sarcasm (and can usually one up me), makes up for my horrible money management by working so hard, and has put up with me for more than 25 years. I guess I’m doing a few things right. 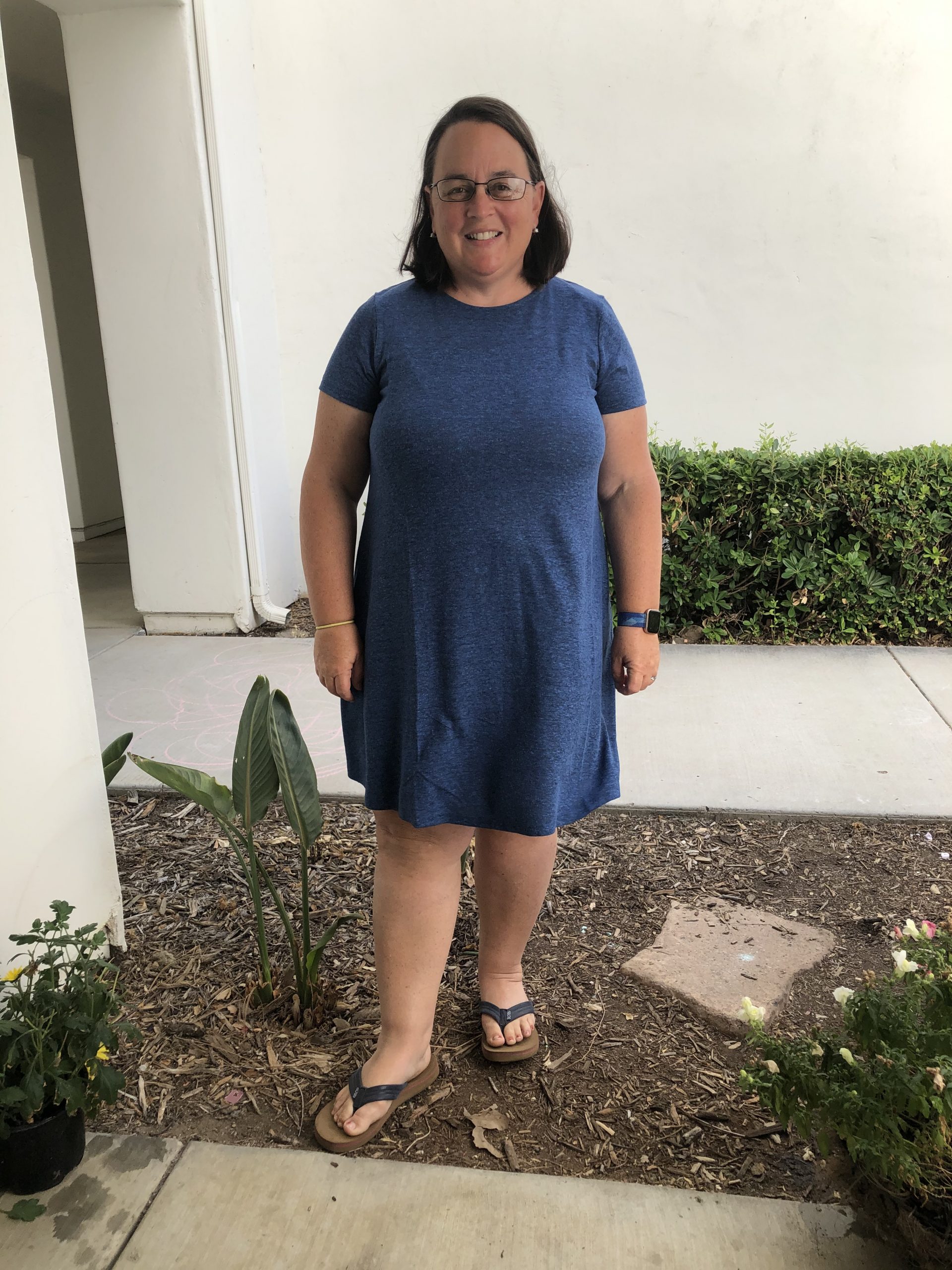 This is what I look like!What would you like written in calligraphy?